In 2012 a new workshop was developed for the Transitional Justice Program by Dr. Ron Dudai, with particular emphasis on transitional justice and conflict transformation in Northern Ireland. Dr. Dudai’s PhD dissertation was completed at Queens University Belfast, and focused on the Northern Ireland conflict.

The Northern Ireland conflict was the bloodiest and most high-profile conflict in Post-WWII Western Europe. The peace process which led to the end of the conflict is considered largely successful, though tensions and violence between the communities still exist. As part of this process, a wide range of transitional justice mechanisms and initiatives have been established in Northern Ireland, both by the state and by civil society.

In the comparative study of transitional justice and conflict transformation, the Northern Ireland case is considered among the most complex and interesting, and in this workshop it serves as a basis for a critical discussion of transitional justice in broader theoretical and practical contexts. The workshop examined issues such as dealing with the past, commissions of inquiry, reconciliation processes, institutional reforms and the role of actors such as civil society, armed groups, and former political prisoners. Importantly, the workshop also explored comparative aspects of the issues, including aspects relating to Israel and the Israeli-Palestinian conflict.

Ten top-notch students of diverse academic backgrounds were selected for the intensive semester-long workshop, which included an 8-day study tour to Northern Ireland. The tour includes numerous meetings, workshops and site visits with politicians, civil society organizations, community leaders, ex-combatants and ex-prisoners from the Catholic and Protestant paramilitary groups, and tours and presentations by numerous engaged academics in the fields of law, criminology and education. As reflected in our students' testimonials, the course and study trip had a profound impact on the participants – providing them with academic and practical tools, with hope and with inspiration:

"How grateful I am for this week, that felt like a month, and was so packed with men and women working for years, in the field, every day, each in their own way, in work that is often so exhausting and discouraging, but from whose fruits – and from the determination and faith driving it – one can only be amazed. How wonderful and confusing it was to hear so many different perspectives - of politicians, academics, activists on the ground – on "what is this conflict about" and on how to deal with its implications. How riveting it was to deconstruct these dichotomies into sub-stories and absent or hidden or silenced stories, and to give them voice. How interesting it was to talk directly with people we met by chance because we happened to be there, in a market or pub or street. How moving was the generosity, patience and willingness to answer every question, however direct or personal, that everyone bestowed upon us.

Thank you for awakening the hope that had fallen asleep in my heart."

"Throughout the trip thoughts are racing all the time between Northern Ireland and Israel/Palestine… about similarities and differences and what can be learned. Questions about the present – is the argument about the Protestant flag marches through Catholic communities similar to that regarding our Jerusalem Day marches of Jews through Eastern Jerusalem, or the Gay Pride Parade in Jerusalem?... And about the future – what role can ex-prisoners play in our process of reconciliation? Can the British apology over Black Sunday be an appropriate model in the context of Jews and Arabs in Israel?...

Thanks to the course and the trip I was able to dive into these issues in the deepest and most complex manner imaginable… I am grateful for the opportunity that was given to me."

"When we landed in Northern Ireland I was very sure of what I know... But already after the first day this sense of confidence was replaced by big question marks. It is true that you told us many times that if we are confused, we're on the right track… My confusion was due to the fact that you can't really say that the conflict has been resolved. Just from walking in a neighborhood in Belfast and seeing a gate in a dividing wall that is still locked at night in order to prevent passage between neighborhoods, just from hearing from about the failure of the mixed school system, just from the very fact that the receptionist at the hotel still whispers the word "Catholic" - I understood that "peace" is a more complex concept than I had grasped until now…

I came back with a big smile. The intensity of the tour, the meetings with people, the personal conversations with students in the group and with locals were a very powerful experience….

I want to thank you again for the amazing opportunity I was given to participate in the workshop. It is so unusual to be the recipient of so much access to information and openness from all of the speakers. This was the best educational experience of my legal studies."

"The sad city of Belfast gave me hope for a resolution in Israel/Palestine. It will not be a happy-end story and many obstacles will arise, but from honest conversations I had and stinging stories I heard, not trying to bright-coloring reality but rather to deal with it, I can see one tiny light at the end of our bloody pathway. We have to cope with the situation and to try to deal with it optimally, even if not perfectly. Though they cannot be fully detailed here, the tour gave me new perspectives and thoughts for futuristic settlements, influenced by the not perfect Northern-Ireland examples.

I do not believe that I could reach theses understandings, surely not in a short week, had I not meet in person so many inspiring, still realistic and honest, persons in Northern-Ireland's tour by Minerva Center. For me, morality is about sensitive honesty about reality with a little hint of optimism. The tour made this hint a clearer one."


Below are selected photos from the Transitional Justice Workshop educational tours in Northern Ireland: 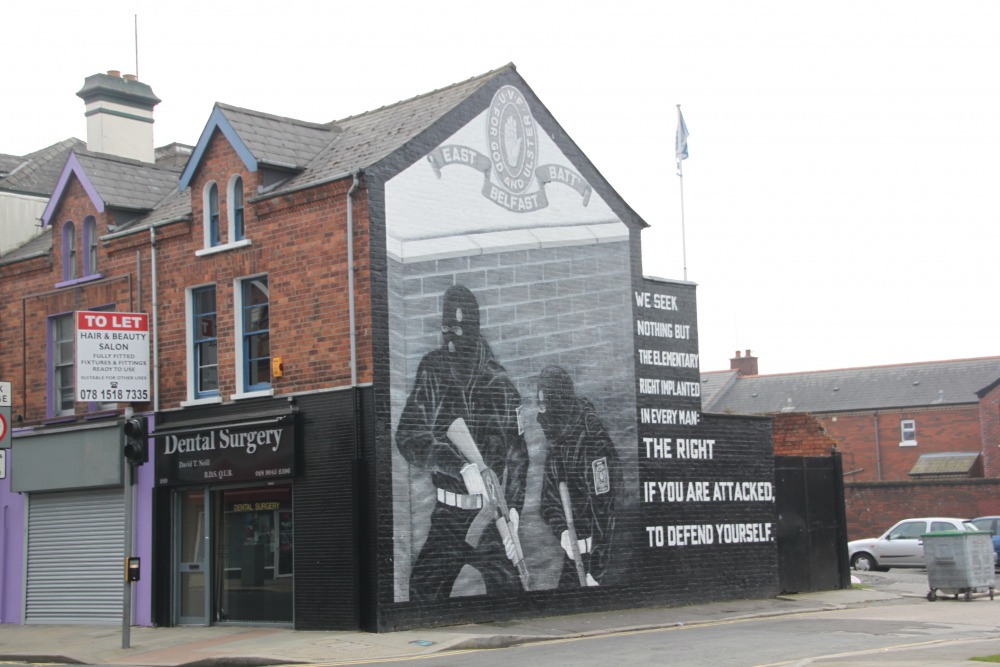 A militant Protestant mural in East Belfast, May 2013 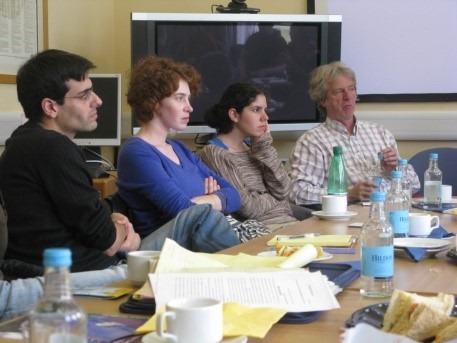 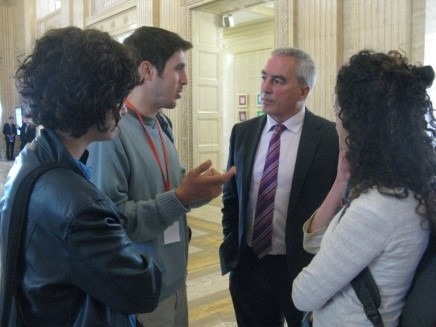 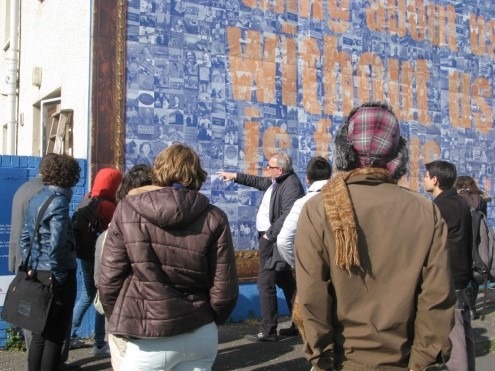 A tour with Prof. Peter Shirlow of Queen's University Belfast:
"Nothing about us without us is for us" 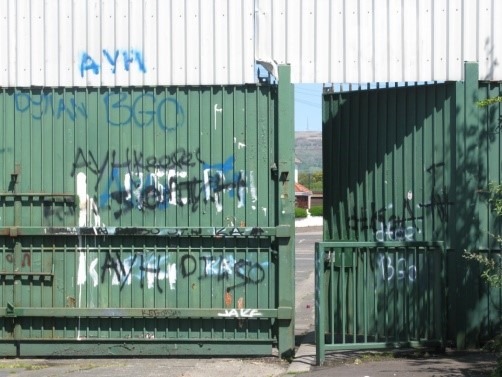 Gate in a "Peace Wall" separating Catholic and Protestant neighborhoods 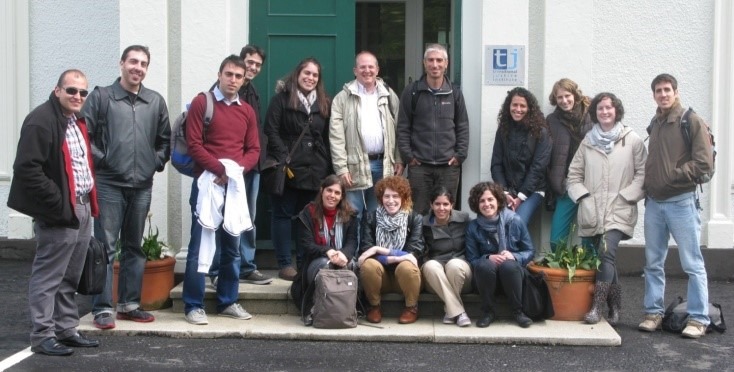 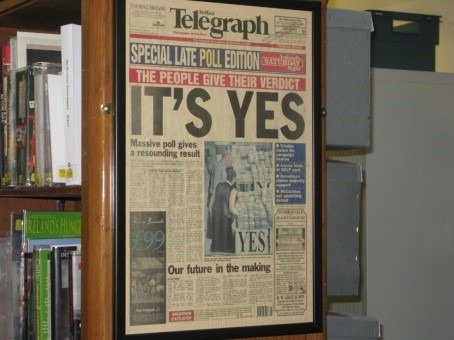 Display at Linen Hall Library: Belfast newspaper of May 23, 1998
announcing the results of the public referendum on the Good Friday Agreement